Warmaster Army Generator
Stefan Hess who helped to write the Warmaster rules has written a nice little program to help you create your own Warmaster armies.

Old Sage Warmaster
Has useful information about each armyand some unofficial army lists.

Parts of this article were inspired by my Techno-Dwarf article from Ragnarok and The Felixian.

It is mentioned in the Empire section about the Empire Steam Tank (page 71) the Dwarfs have built giant Steam Juggernauts.

My intention is to build something similar to my Old Glory 25mm War Wagon using the Empire War Altar, plasticard and some time... though it seems I was not the only one with this idea as seen in WarMag #1. 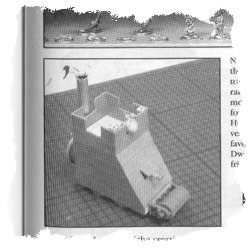 Here are some photographs of work in progress... I have been using an Empire War Altar and a Dwarf Cannon and Flame Cannon. 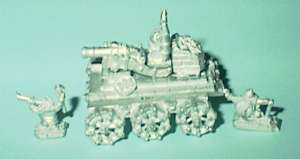 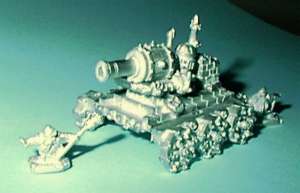 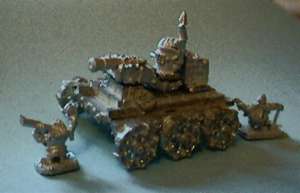 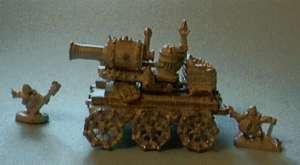 There are numerous tales throughout the Warhammer World of large Dwarf Steam Juggernauts. There are stories of War Wagons, Battlewagons, and other huge Machineries of Destruction.

They are all huge steam engine powered wagons, armed with a variety of weapons, but usually either a cannon or a Flame Cannon.

Some will also have a troop carrying facility, and either Dwarf Thunderers or Rangers will ride the wagon into battle. Once engaged with the enemy will, fire salvo after salvo into the enemy ranks.

The War Wagon forms a unit of its own and moves up to 20cm and must be given its own orders.

War Wagons may carry up to two stands of infantry.

War Wagon's armed with Flame Cannons must use the Flame Cannon Misfire Chart (on page 70 of the main rules).

There are even stories of even larger machines, complete with platforms for flights of Gyrocopters, armoured cannon turrets, carrying hundreds of dwarfs into battle. These Land Dreadnoughts are huge and rare, very rare.

It is known that Dwarfs are excellent at gunpowder devices, when defending their strongholds or besieging an enemy fortification they will utilise the larger cannons in their arsenal. You could use the Bombard rules in WarMag #1 for this, personally I want something "bigger".

Do Dwarfs like flying? Citadel seemed to think so, Dwarfs in Warmaster already have gyrocopters (see main rules page 71). Airships and hot air balloons provide another way to get your dwarfs into the air.

I read somewhere that Rick Priestly likes the idea of a Dwarf Airship. I do have a Revell mode kit of the Hindenburgh which is just waiting to be converted...

Airships are difficult as they require hydrogen (or helium) and to get hydrogen, you need water and electrolysis - which requires electricity. But you couldn't use magic, could you, well not with Dwarves anyhow?

Hot air balloons are slightly easier, as Montgolfier will no doubt verify. Aeroplanes and Gliders, the glider is a much simpler device, powered flight is more flexible.

Those of you who remember Man O War will realise that Dwarves have quite powerful ironclad ships (and a submersible) to play around with. Luckily for us Warmaster already has rules for boats and ships... personally I would like to make a Dwarf paddlesteamer (aka British Gunboats on the Nile.