Check out our Epic Armageddon pages.

Epic Armageddon now available to buy, and you can get it from Mail Order or your local GW store in the UK that is.

Carl has updated his excellent Dropship website, check it out.

News: Picture of the Day

The Fanatic website has started showing us some of the new models for Epic Armageddon, with a new picture everyday for the last week. So far we have seen Soopa-Guns, Stompas, Valkyries and lots more... 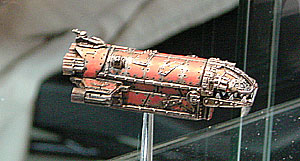 The biggest Games Workshop event of the year, I have a few pictures here with links to other sites on the web.

Forgeworld have released Ork and Eldar models for Epic.

Games Workshop have updated their Epic Armageddon pages; check them out.

Check out our Epic Armageddon pages.

In the dark future of the 41st Millennium, there is only war. However, Epic 40,000 brings futuristic combat to your tabletop on a whole new scale as entire armies of thousands of troops do battle among legions of the most powerful and gigantic weapons of war ever to blast their opponents into oblivion in the nightmarish future of the Warhammer 40,000 universe!

On this section of Felix's Gaming Pages you can find lots of photographs of Epic miniatures, a rules page which contains ideas and comments on Epic 40K. An Ork Conversions Page which has Gun Trukks, Trukks, Battlefortress and a Grot Bomb Launcha. You can also find photographic battle reports.

I first played "Epic" with the release of Space Marine in 1989. I had seen Adeptus Titanicus in 1988, but thought it's "Battletech" so didn't buy it. I didn't really like the Space Marine rules (heretic I hear you say) but did like the miniatures. In the end I used a simplified version of Dirtside from GZG.

When Titan Legions was published I really hated the Ork Mega-Gargant (still do I am afaid to say) and didn't like the simplicity of the new Epic models.

Everything changed with the release of Epic40000 and I thought the new models were excellent especially the Imperial Guard models. I bought a shedload in the February 1998 sale plus got some more when a local gaming shop closed down and had a 50% off sale.

I am looking forward to the new version, Epic Armageddon and hopefully we will see lots of new and exciting models as a result.

I have a large Ork force (still too many infantry to paint) though this is my major and favourite force for Epic, I just find it an amusing army to fight with and I like the fact the rules reflect this. I am currently converting some miniatures into Heavy Artillery, I also have a large Ork transport on the way and I am thinking about making some Heavy Ork Bommerz...

I also have an Imperial Guard Tank force as I do like tanks and the miniatures are the best of the lot.

Space Marines - well when you get all those plastic miniatures in the box, you have to do something with them, find them a little too shooty for me.

I am painting up an Eldar detachment to be a allied force and have some Squats hanging around from 1989ish to paint up as well.

I also have a large and varied collection of "non-official" miniatures, such as GZG VTOLs and CMD Patrol Boats. I have also built using Tamiya 35mm German Armoured Cars and Half-tracks.

Scenery is either scratch-built, Snapdragon Studio (sadly no longer available) and Forgeworld.